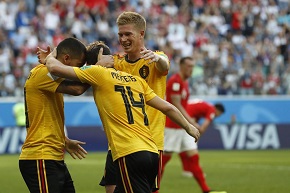 ANALYSIS AND PREDICTION FOR BELGIUM - RUSSIA

Belgium will be without some key figures for the team against Russia. This means that Hazard brothers are likely to lead the attack together with Mertens. Tielemans is also called, and he is in good shape at the moment. Belgium had a crash in their last match against Russia and that was a big failure for the team, but they proved that after such games they are coming back even stronger. And that does not change Martinez’s plans much.

Russia was in a position similar to that of Belgium and failed to qualify for playoffs through the League of Nations as they dropped the first position at the end. Sbornaya entered this game in a series of 2 consecutive losses without scoring a goal in them. What they did at the World Cup was great, but it certainly can not be said that the Russians were impressive with their game. They will have a lot of difficulties against Belgium even with these players.

The only questions are how Belgium will look in the midfield. Still, they are hosts where they usually break their opponents, and what the red devils have shown in recent years is that they do not stop playing from the first to the last minute. Moreover, they show their class in so important matches. We believe that the Russians will not withstand the pressure of Belgium and will concede at least 2 goals. Prediction – Belgium – Over 1.5 goals at 1.43.