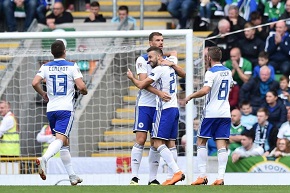 ANALYSIS AND PREDICTION FOR BOSNIA - ARMENIA

Bosnia has a high – quality defense that allows few goals, and even harder at home, where they will play now. Bosnia took the group in the League of Nations with ease and finished with 10 of the possible 12 points, which means they will play a playoff. For this reason and their overall good performances in recent years, they will be very motivated in this fight, as before the game was declared that the hunger for success is now greater than ever.

No matter how much they tried, Armenia has failed to reach the covenant goal, the first place in the League of Nations. Macedonia were unappealing in their group, and Armenia now faces a far more complex task. Except for the big star, Mkhitaryan, the team is made up of very weak athletes who play in leagues well below the level of the Bosnian stars.

Bosnia will hardly concede a goal from Armenia, but we expect with the help of Pjanic and Dzeko to score at least twice in the net of Armenia. The defense of the Armenians is very weak, and now there will be several key names missing there. They have concede at least 2 goals in 4 of their last 5 Euro qualifiers and Bosnia scored at least 2 goals in 3 of their last 4 Euro qualifications at home. We expect this not to be a problem now. Prediction – Bosnia over 1.5 goals at 1.56.