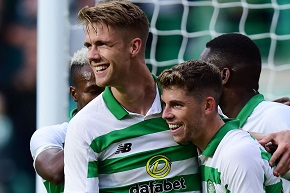 ANALYSIS AND PREDICTION FOR CELTIC - KALJU

Celtic has not yet begun their matches in Scotland by playing only friendlies, and Lennon has already said he is pleased with the team and is expecting a lot of his boys in the coming season. In the last round, Celtic had an easy task with Sarajevo winning both games with a total score of 5 to 2. Now their test seems even easier, but only at paper.

Nõmme Kalju is an Estonian team who somehow managed to win the second round of the UCL after a draw in the total result with Shkëndija, but with 2 goals away from home. Kalju only had one single participation before in the tournament, and it was 6 years ago that first eliminated the Finnish HJK and then was destroyed by Viktoria Plzen.

Expert view : If Celtic does not suffer any upheavals or something extraordinary happens, it must repeat the actions of the Czechs 6 years ago. Then Plzen scored a total of 10 goals against the Estonians, and in the rematch allowed 2, but that did not affect in any way. Celtic are classes over their rivals today, and here we do not have many other bet options except a clear win for the hosts. We chose the most popular Celtic -2.5 AH at 1.50.