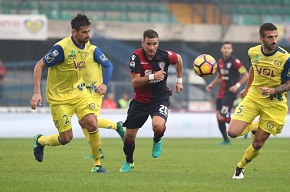 ANALYSIS AND PREDICTION FOR CHIEVO - CAGLIARI

Chievo is actually relegated. Of the 28 games, they have 11 points (14 points if we count 3 reduced) and at the same time they will need at least another 20-25 for ten matches, so they will hardly have the opportunity to do so. They have only one win so far this season has come after much trouble over Frosinone at home. Now they are going to fight against one of their most comfortable opponents lately.

Cagliari has a real chance to survive. Of course, their position is very good with 6 points ahead of Bologna, who are 18th. For Cagliari, similar matches are required to take some points, because their program to the end is far from being the easiest. Even in the next round, they have a home match over Juventus. Cagliari have been playing strong and weak games lately, but this is due to the difference in shape as host and guest.

We will definitely not see either the most exciting or the most dynamic Serie A game in this round on Friday night. But what we expect is a very serious fight. We will bet on Chievo or draw at 1.46, because they have nothing to lose. Normally they do well against Cagliari, and the guests have only one win away from home during the season and even rarely come to draws, as the victory came quite accidentally in the second round against Atalanta.