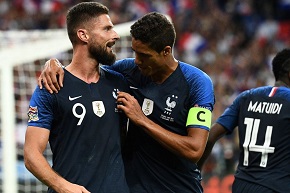 ANALYSIS AND PREDICTION FOR FRANCE - ICELAND

France were expected to smash Moldova and scored four goals, but typical for the cocks, they relaxed at the end and allowed one. After All, Deschampsis obliged to keep the team hungry for success. They broke down at home in the final of Euro 2016, so that being world champions does not matter. The Euros is another tournament, where it is yet to be proved. They are in good shape and have a huge chance to win this relatively easy group.

Iceland did not successfully succeeded in the World Cup and failed to reap the successes of Euro 16, which cannot be claimed as a failure, but the opposite, because this team is made up of players who do not play in the strongest teams of the world. Of course, they also have big stars as Sigurdsson, but this is a country with less than half a million population, so the successes they have achieved are significant. Iceland is in weak form and despite the victory in the last game, will hardly be able to withhold France.

France is in brilliant form at home. The Roosters have scored many goals as a host, and it has recently been against teams like Germany, Holland and Italy. Icelanders recently played a friendly match with France as a guest and managed to extricate the draw 2-2. This happened October, so the two teams knew each other. We Think that France will approach professionally in the clash and will give everything by themselves, which means that they will most likely win, but we bet on goals, because Iceland is quite a direct team. Prediction – Over 2.5 goals at 1.62.