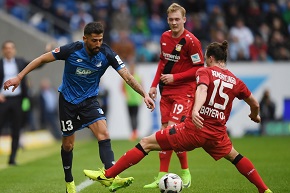 ANALYSIS AND PREDICTION FOR HOFFENHEIM - BAYER

Hoffenheim did not play a good game against Stuttgart in the last round and ended only 1-1. Another proof of Nagelsmann’s team hesitancy. It is expected next season if he remains in the team, there will be a change in the style of play and more emphasis on the balance of defense and attack, but there is no such balance at the moment. Hoffenheim seems to only play in an attack and they do not defend themselves, so they participate in goal serenades in almost every match.

Bayer had just picked up two wins after Dortmund’s loss and collapsed home after a defeat by Werder. This lowered their chances of being ranked in the top 4, but after Gladbach’s draw, they still have them. Leverkusen lags only 5 points so they do not have much time to think. The good thing about them is that they seldom make draws. They usually rush to victory, which often gives them success.

It is expected, of course, another goal show. With these weak defenses and the strong attacks of both teams, we can not help seeing a spectacle. However, the odds of even BTTS + Over 2.5 goals are not worth it. That’s why we are heading for a sign. We chose X2 at 1.65 for some basic reasons. Hoffenheim have no home win over team over 11th place and Leverkusen always play very strongly against the teams that are around them in the standings or when they go out as an underdog.