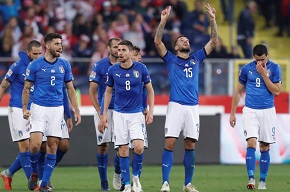 ANALYSIS AND PREDICTION FOR ITALY - FINLAND

With Mancini everything in the Italian national team has improved, but not enough. It is very important for him to improve the defense considerably, which is normal for the Italians as a club and as a national football. This was seen in the last matches in which Italy allowed only one goal out of four games played and that goal was in a friendly game. Italy has no right to let it go, and if they miss a new big forum, it will be a real catastrophe.

From Finland, we saw very nice things in the League of Nations, but their competitors were not at that level, of course. The tactics of the guests will be very simple – defense all the time and when they are given the opportunity to counter attack, they will just send the ball to Pukki or take it out and count on the Championship top scorer to do something.

Italy is not with the best attack, and at the same time their defense is impenetrable with Bonucci, Chiellini and Romagnoli. We expect a defensive match without a lot of chances and with few goals. For Italy the typical 1-0 will be enough. 8 of the last 9 home games of Italy in all tournaments have completed under 2.5 goals. 12 of the last 13 visits for Finland have ended with Under 2.5 goals. Prediction – Under 2.5 goals at 1.72.