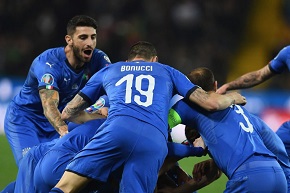 ANALYSIS AND PREDICTION FOR ITALY - LIECHTENSTEIN

Italy successfully got their win against the Finns. The Hosts managed to neutralize Pukki, and scored at the beginning of the match and completely took place very well. There is now an even easier task against one of the weakest teams in Europe, in the face of Liechtenstein. We can be almost sure that the guests will hardly reach the post of Italy with a view to the improvement of the Italians in defense.

Liechtenstein achieved their only successes recently against teams such as Gibraltar in the Nations League and Qatar in a friendly match two years ago. In almost all other matches Liechtenstein is defeated by opponents and it is quite logical that this will happen now also against Italy. They played worthily, though, against Greece and lost only with 0-2 at home in the first game.

We Expect the Italians to score a few goals in the first half and then just finish the match. It is an Honor to wear the national jersey, but given that all the Italian internationals have such an important ending of the season with their club teams, where everything is decided now, hardly anyone will want to get injured. Therefore, our prediction is related to the quick “solve” of the match. Prediction – First half – Italy-1.5 AH at 1.54.