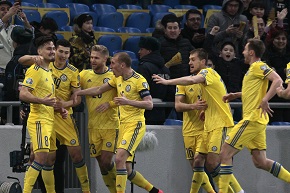 ANALYSIS AND PREDICTION FOR KAZAKHSTAN - RUSSIA

Kazakhstan has launched a shock campaign in the Euro Qualifiers following a classic success with 3-0 against Scotland. This was the first official game of the new coach, Bilek. The Czech achieved another victory with 1-0 at home against Moldova in a friendly. Even before his appointment, Kazakhstan took several good results at home, especially against the backdrop of their tragic performance before. The Quality in the team is not great, but the desire is huge.

Russia was not successful and this was quite expected against Belgium, although they succeeded to score a goal against the Red Devils, although the goal of Sbornaya was very random and rather a gift. This game will certainly not be easier. These are neighborhood countries, and we’re going to see a big derby here. The Russians also had some changes, and after the world cup top performance, some long-standing football players retired. Their Goal, of course, is the going to the Euros, but they are currently in a series of 3 losses in a row.

We Believe that Kazakhstan will start a very confident and offensive match and will not give the initiative to Russia. We Expect a lot of problems for the guests. The Match at the beginning most likely will be the overlying, and then will be decided in the second part. Because of the domestic factor and the overwhelming desire of Kazakhstan, they should not lose the first half. They did not concede a single goal at home in the first part in their last 4 games, and Russia did not score in the first half in the last 6 visits. Prediction – First Half – Kazakhstan or draw on 1.52.