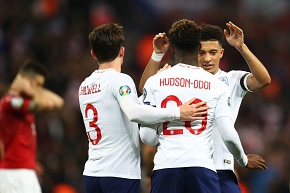 ANALYSIS AND PREDICTION FOR MONTENEGRO - ENGLAND

From the game with Bulgaria we saw that Montenegro does not have many arguments in an attack without Jovetic, but sometimes they can take advantage of mistakes of the opponents. Surely Montenegro are much more confident at their stadium, and they have experience in matches against England. Each Duel in the groups is viewed separately, but strategic plans are made what result is acceptable and in view of the condition of both teams as a form and composition, it is a definite acceptable result will be a new draw for Montenegro.

England crushed the Czech Republic of Wembley, but now a more complex test awaits them. The Three Lions showed composure in attack, and the hero of the evening was Sterling, who scored a hat-trick and won the penalty for England. Southgate seems to have already created a great atmosphere in the team and whether there are important absent or other external problems, the team of England itself already has a completely different self-esteem and approach in the matches.

England has a very strong defense and rarely allows goals. In the absence of Jovetic, there are hardly any big chances for them to score. At The same time, the defensive approach of Montenegro brings them success against such rivals, and England is accustomed to defeating winning 1-0 and ugly when necessary. We Expect something like this to happen now. The Last four games of Montenegro ended with 2.5 goals. Our Prediction for this match is Under 2.5 goals at 1.75.