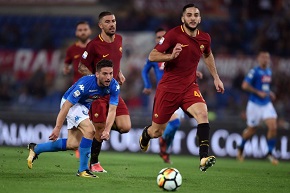 ANALYSIS AND PREDICTION FOR ROMA - NAPOLI

Roma did not enjoy the most impressive start of Ranieri in the last round, when they lost from SPAL, but that was logical in this weak after their performance. They now face one of the most powerful teams in Italy – Napoli. Their form at Olympico is totally different and they are obliged to seek victory. Draw does not suit them, regardless of the result Milan achieved yesterday against Sampdoria.

Napoli have shown very clearly and obvious that they have now fully focused their attention on the Europa League. Yes, they defeated Udinese in the last round, but before that they released a lot of reserves against Sassuolo. It is clear that the Neapolitanс have no chance for the title, even though they are still relatively close to dropping their lead by seven points in front of Inter, so they will have to take at least five wins from their remaining 10 games to be sure about the second position , but their concentration is not at the same level.

Roma scored and allowed goals with ease, and Napoli’s attack is deadly, so we expect a goal match. The fact that Napoli is going to play without tension, and we have seen enough times during the season how annoying the Ancelotti team is, says that we certainly do not see much chance of them not to score against the wolves. The battle between the two Italian coaches, Ranieri and Ancelotti will also be very interesting here. Prediction – BTTS at 1.63.