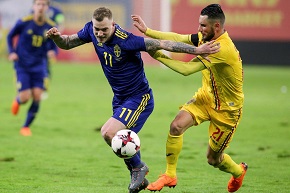 ANALYSIS AND PREDICTION FOR SWEDEN - ROMANIA

Sweden played a single game against Romania in this century and it was last year in a friendly, where they lost 1-0 as a guest from the Romanians. Now things are quite different, but it is important for Sweden to continue winning matches as soon as possible. It seemed they came back from nowhere in the game and finished first in the league of Nations after 1 point in the first 2 games. The Swedes will have some problems in attack because of the lack of important figures.

For Romania, the list with injured is much larger at the moment, which is a problem. The Romanians have no playoffs because they failed to finish first in their League of Nations, so only in qualifying they will have the chance to play at the Euros. They are in a fairly good shape and have not allowed a goal in their last 3 games, which speaks for improvement in defense, but now they have a lot of injuries in all areas of the field.

There are two of the most defensive teams in Europe, so it is hard to expect a spectacle. Sweden’s defense will again be led by the great Granqvist, and for Romania, draw would be a great result in view of the events. In 5 consecutive Euro qualifiers, Romania has scored no goal and very rarely can be seen spectacular matches with the participation of Sweden overall, so our forecast here is for a few goals – Under 2.5 goals at 1.56.