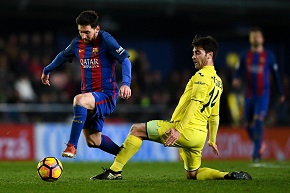 ANALYSIS AND PREDICTION FOR VILLARREAL - BARCELONA

Villarreal returned their confidence after two wins in La Liga, but they lost again over the weekend. This time the loss was taken very heavily because it was a direct clash for Survival with Celta, which was revived after 0-2 in favor of the yellow submarine. The match still ended 3-2 in favor of Celta and the first goal was scored by the returning talisman, Iago Aspas. This means that the difference between Villarreal and Celta is just one point.

Barcelona did not get that easy victory against Espanyol with some strange moments in the game. They have a few more victories to become officially champions, and that seems to happen in any case. Most importantly, after the match with Villarreal, they had a match with Atletico during the weekend just before the huge clash with Manchester United at Old Trafford in the Champions League. So we do not expect them to be 100% concentrated against Villarreal today.

Barca can beat Villarreal with ease, but here the motivation factor and the importance of the match have a lot to do with it. Of course, for Villarreal this match is life and death, and every match remains like this until the end of the season. The yellow submarine is not doing so badly against the top teams, and let us not forget that they are also participating in Europe. The fact that Barca will score is unnecessary to mention, but we expect their defense to allow at least one goal, as happened in 3 of the last 4 visits here. Prediction – BTTS at 1.63.

Dembele(24/8 F) is out. (Barcelona head coach Ernesto Valverde could rest some of his first team players.)