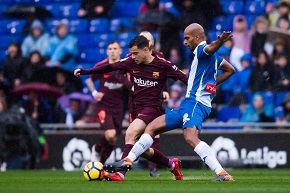 ANALYSIS AND PREDICTION FOR BARCELONA - ESPANYOL

Barcelona is in top shape and is expected to continue until the end of the season. The Catalans need about 5-6 wins from the remaining 10 matches to become champions, which no doubt seems to be the most likely scenario until the end of the championship. Messi and Company are back in mood, because they have not serious injuries the squad, and the Argentine was saved, although he had problems in Venezuela game.

Espanyol lost at home to Sevilla in the last round and definitely did not play the strongest game. The Catalan team will surely not get relegated, but there is not much chance of even getting into the top seven, so they are just playing for fun till the end of the season. They tend to be very strict in defense, and rarely allow themselves much. Espanyol has a great deal of difficulty in visiting, however.

Here we do not think there is anything surprising to happen. Yes, this is a derby, but the difference in the class is very serious, and yet Barca are hosts. They are also in shape and the match for them is much more important, so we think they will score many goals against Espanyol in this match as there will be at least one hit in both halves – something common in Valverde’s team against similar rivals . Prediction – Barcelona to score in both halves at 1.53.