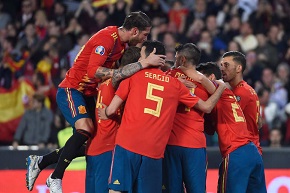 ANALYSIS AND PREDICTION FOR MALTA - SPAIN

Malta managed to take a valuable victory against the Faroe Islands in the last round, which is impressive for this team, as it rarely achieves victories at all, but even more commendable is that this happened after the player of Malta was sent off at 60 minutes. Of Course, now their loss is sure, because they face one of the world forces in football – Spain.

The Spaniards also took a valuable, but also very difficult victory against Norway after they received penalty in the last 20 minutes of the match. It should be noted most – already that La Furia Roja created chances even for 5 goals, but failed to realize them. The main “hero” for this should be Morata. The Player of Atletico can hardly show good shape in several matches in a row, so Luis Enrique is obliged to make appropriate changes.

There will hardly be any difficulty for Spain. Malta has problems even with the teams that are being on their level and are constantly losing similar matches, so what’s left for clashes with teams like Spain. La Furia Roja often defeated such rivals with big difference and don’t underestimate such games. This is the reason why we believe that guests will take the game with ease and will not admit a goal. Therefore Prediction – BTTS – NO + Over 2.5 goals at 1.46.